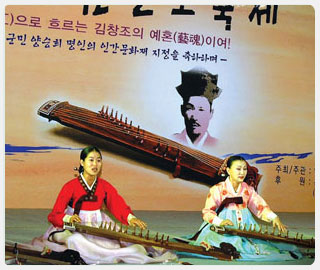 Celebrated musician Kim Changjo, who became the originator of Sanjo by creating the 'Gayageum Sanjo,' was born in Hoimun-ri, Yeongam-eup, and revered as the greatest national musician in North Korea as well as in South Korea second only to Wureuk.

According to the Gayageum textbook of North Korea (published on September 11, 1958), 'he holds a special position in the music ideology of Joseon. He is a great performer and excellent composer of the period. In particular, the Gayageum Sanjo he composed is recognized as an immortal achievement in folk music. Sanjo is not just limited to Gayageum, but contributed to each genre of instrumental music.'

Besides Kim Changjo, Yeongam produced Gayageum masters such as Kim Gyeongho, Han Seonggi and Kim Jukpa, newly emerging as the sacred place of Korean traditional music. To pay tribute to the great accomplishment of Kim Changjo and illuminate the historicity and artistry of Korean traditional Sanjo, the 'Sanjo Festival and Academic Conference' are held annually in Yeongam and Seoul respectively.